Last Saturday our Sydney Striders crew ran a trail in the Ku-Ring-Gai National Park which was named after one of the group’s runners who created the course, Clare’s Calamity.

We had a huge group of over 40 runners show up for this run which was great to see. And with just 7 weeks until the 6 Foot track Marathon it’s clear everyone was putting in the kms to be as prepared as possible. I can’t believe it’s only 7 weeks away, scary!!

Andy met us at the start and gave us all a map of the course with some directions on the other side, and it looked like we were running the shape of a butterfly. I stuck the map in my front pocket and hoped that it would stay dry. Must remember next time to bring a plastic sleeve to put the map in!

So we started off down the first section of the course which was fire trail and then hit some single-tracked rocky section down to the water. I could not believe the view with the fog over the water, it was supposed to hit over 40 degrees that day! Check it out! 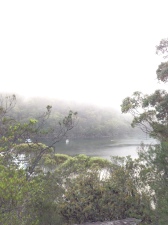 We also came past a local toilet block and everybody ducked in for one last pit stop before carrying on the trail. We crossed a bridge and made our way along some beautiful trails along the side of the mountain. It was very narrow and there were a lot of fallen trees to contend with but it was a lovely place to be.

Here is a shot of my running buddies Lorena and Karen contemplating a river crossing, there were a few tricky spots but we helped each other across.

It was really heating up and the humidity meant that I was going through water quicker than normal, so I made a note to slow down a little to make sure i had enough to last the whole 30km trip. I had also put 2 Shotz tablets into my 2 litre hydration flask today, just trialing it to see if it makes a difference. I wanted to put it into a separate, smaller container but I didn’t have one so I guesstimated this measurement. Funnily enough I did notice that I felt better and more consistent for a longer period of time this week, there didn’t seem to be any peaks and troughs so maybe this had something to do with it.

I have put in an order for 500ml soft hydration flask but it hasn’t been delivered yet. I will use this to put 1 tablet with water and have it separate on my runs in future, well that’s the plan.

Leonor even decided to have a little rest on the wooden bench that had been provided, ha ha Actually she’s the fittest of us all and we thought it was hilarious that there were benches at every bend of this steep section on the course.

Leonor is running through the Sahara desert in April and is doing the equivalent of a marathon each day for 5 days, how hardcore is that! She’s an inspiration let me tell you. Such a bright, bubbly lady and I got some really good tips from her during the run too. Like the Gurney Goo, stops blisters entirely and is killer stuff.

This course had some really steep, hilly sections and most of them we walked. The view in my next photo below shows a spot that we had just run from, on the top of the other side of the valley. 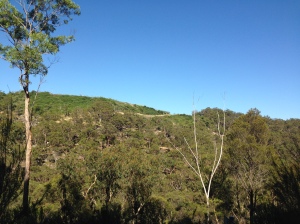 And then we got lost… ha ha. In the photo below you can see a bridge that we stopped at to take photos and this is apparently where we went wrong. Ooops! We went over this bridge when apparently we should not have, and we ran quite a distance after this photo was taken.

When we eventually realised that we didn’t know where we were going, we turned back around and headed for the road section we passed a little while earlier. We knew how to get back to the start point from the road so we decided to take the less risky option as we had already been running for over 3 and a half hours.

So just before turning back we decided to have a selfie…. so here’s Karen, Leonor and myself on the right laughing and having a blast. It really was such an enjoyable run sharing the road with them and I hope I didn’t slow them down. 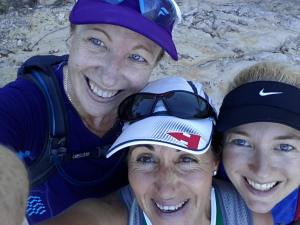 So we ran along the road back to the cars and gossiped the whole way. What a hoot! A most enjoyable run and it’s thanks to Karen & Leonor.

Thank you so much ladies and happy running 😀