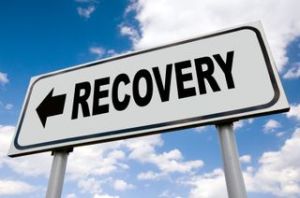 I organised to have a week off work after my TNF100 race and I’m so glad that i did. I got a chance to sleep and sit around resting my legs, especially my injured leg.

Monday morning after the race I went to the physio to get my leg checked out. He asked how far I had run, and when I replied with “78km” he said “7 to 8 kms?” and I said “No, 78km” . He looked at me strangely for a minute and said that he didn’t believe me. Honestly. He looked at me like I was a crazy lady and I guess we ultra runners are a little crazy.

He confirmed that I can done tendon damage in two spots, near the top of my ITB (near the hip) and also the part that joins to the glute medius (the butt). He said it was similar to tendinitis and was probably triggered when I fell and got worse as I continued, sounded about right. He did some trigger point massage which was painful and got me to do some isometric exercises, and then he iced the whole area.

I told him I had a race in 2 weeks time and another in 5 weeks time and he just looked at me and shook his head. He told me that it was going to be a few weeks of recovery and that I should rest as much as possible, definitely no running and no long walks either. I was to do my exercises 3 times a day and ice it after each session.

When I went back to see him on Wednesday it felt much the same, maybe even a little sorer but in a different way. He did similar to what he had done on Monday and he asked me to come back on Friday for another session.

By Friday it was feeling slightly better and i could now walk with no pain at all. So he decided to do some ‘dry needling’ on the affected area and I have never felt anything like it. It hurt like hell. It felt like he was jabbing a needle into the muscle and swirling it around underneath my skin. It was horrible!!

He then applied a heat pack to the area and told me that I coped really well with the pain, and not to do any exercises for the rest of the day. After the heat pack, he then iced the area and sent me on my way. I could hardly walk again, it felt weird, not painful, just kind of numb and tingly.

I saw him again yesterday morning and I’m booked in again on Thursday afternoon, where he is going to do some more of the dry needling – great!!I am also hopijg that he tells me I can start running again as there is a race I am registerd for this weekend, the NOSH Footrace. But I know I must not push it too soon, i’m just very impatient!!

Aside from the injury I’m feeling quite good. I have eaten well and had lots of fluid and I feel like I could actually go for a run (if it wasn’t for my injury).

I will update you all again soon.