We only have 4 more sleeps until we hit this bad boy….

Our team, the 4*100 Trailblazers are aiming to run 100km and finish in 20 hours, so if we start at 7.00am on Friday 22 August then we should be finished by around 3.00am on Saturday 23 August, while you’er all tucked away in your warm beds. Time to carb-load and get plenty of rest, bring it on!!

If you want to track us or make a donation you can do so via this link: https://trailwalker.oxfam.org.au/team/home/17564

After the meeting Roger, Dominic and I hit the trails and ran from Berowra to St Ives, which is checkpoint 2 to checkpoint 4 of the Oxfam course. It was a cracker of a day and we had a lots of laughs as usual, but we missed have smiley Em with us, she is the only one in our crew to have kids, so she is generally a lot busier than us but always gives 200%.

Here’s a few shots of us on the boardwalk during our ron. The first one if Dom and I, and the other is Roger and & I – we’re always acting like fools! ha ha 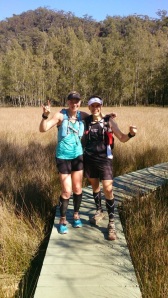 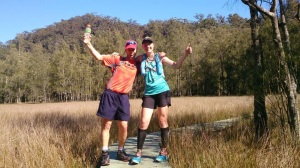 And the bridge was out!! The boys were trying to tell me that I’d have to swim across, but i’m not that gullible and luckily that was not our direction of travel today.

Roger was taking notes the whole way on our trip, timing each small section and giving us an update on how we were tracking compared to our planned times for race day. We ended up being ahead for most of the run but that’s to be expected as we were on fresh legs, however on race day we will have already done about 30kms before we even get to Berowra, so it will be a lot slower. 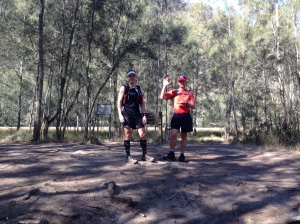 There were some awesome caves and rock formations on the run, a very beautiful trail. 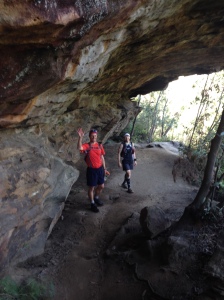 Dom was trying out some new energy snacks and we couldn’t get a word out of him until it was finished. He would not stop talking about how good they were so i’m off to try some and might use them on race day too. Cheeky monkey!! ha ha

A small path section before we hit the trails again. 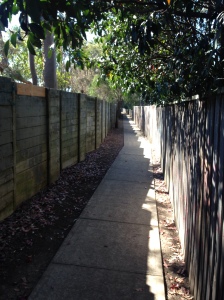 Just before we got to checkpoint 3, which was roughly our halfway point, the view was spectacular. How lucky were we to be out there!! 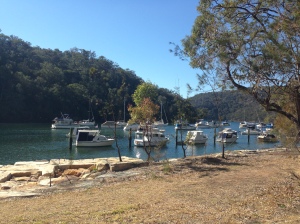 And while we rested at checkpoint 3 having coca cola’s and snacks a cool army-like car went past, never seen one of these before either. My brother (and Dad if he can figure out how to work facebook) will love this shot!! 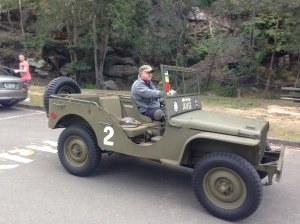 And we were off again over the bridge and onto the trails…. 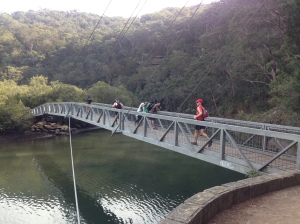 Whilst climbing a very short but steep hill we came across this pile of rocks and i had to stop and take a picture (plus it was a great excuse for a breather, shhh!!)

We ran past this monument on the Sphinx track, I’ve heard about it before and seen pics but never gone past it. 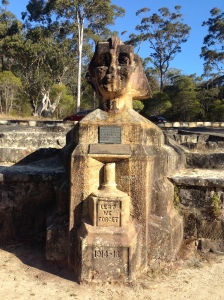 Dom was powering ahead… 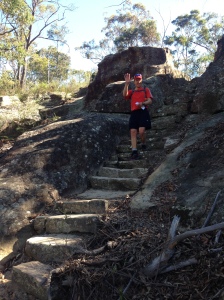 and I took a selfie! ha ha

All in all I had a fantastic time on our run and felt a little relieved when we got back to the cars at St Ives. Today was our last long run before taper mode, less than 2 weeks until race day – how exciting!! 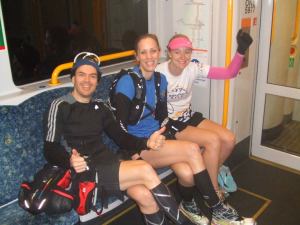 Firstly I want to thanks Roger for taking such great photos, they really capture the fun times that have on the trails and it’s great to be able to share that with you all.

Last Saturday we boarded the train at Berowra Station early on Saturday morning headed for the Hawkesbury River. The plan was to run sections 1 and 2 of the Oxfam course and we were all looking forward to the first checkpoint where Roger’s mum & her partner norm were going to meet us with coffee and food. It was bloody cold that morning.

We got to Hawkesbury River and lots of hikers/runners got off the train and headed for the trail just like us, it’s great to see so many other groups out there training on the course too. We had a little chat with most of the groups that we ran past as they were all walking, and we wished each other well for race day. 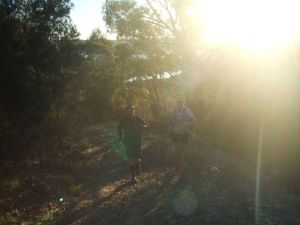 Emma and Dominic were leading the pack and Roger and I both stopped to take some photos in a few spots, my favorite shot of the day is the one below. 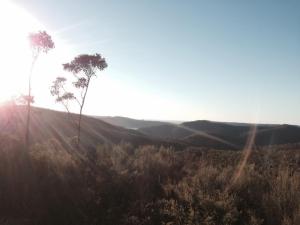 The water was so flat up there amongst the hills, such a clear sky too. 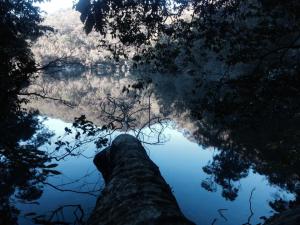 We all ran and laughed and joked around quite a lot for this run, it was a great morning and check out our support crew below. I had decided to make a kilt to keep me warm at the stop while i ate everything offered to me (I don’t recommend this, ha ha) – hard boiled eggs, bread, salt packets, coffee…. 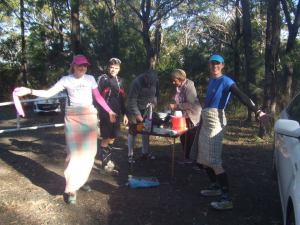 How good is my kilt?

At the checkpoint Roger also picked up his bacon & egg subway wrap and proceeded to eat it during the next section as we ran down the mountain – talk about showing off. Clearly we were going way too slow for him – ha ha

And not only did our run involved running, it also involved climbing up and down rock surfaces which is always fun. At one point I made my own way down a rock and Emma followed me as i led her astray. We got there in the end and it was one of the most enjoyable trail runs I’ve ever had. Thanks team!!

So here is my awesome Oxfamily (below) and if you want to support us you can do so via this link: https://trailwalker.oxfam.org.au/team/home/17564 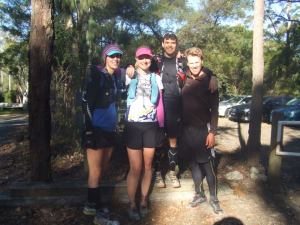 Have you ever been out on a run and your legs felt like dead weights? That was me on Sunday, I was struggling with every step and it felt like I was doing more harm than good. I have actually never felt so flat, not even when I’ve been running my ultras.

Looking back I can see why I was tired as I’d given myself a kick up the butt last week and ramped up my training schedule as the physio had given me the thumbs up last Monday morning. So what had I done differently since then?

Tuesday morning I got up and ran 3km of hillyness with the dog around my local area, I had a work training day & dinner that night so couldn’t fit anything else into the agenda unfortunately.

Wednesday I got up early and took the dog for a 3km power walk around the block, then went for a 9km run at lunch out to Pyrmont wharves and back.

Thursday I got up early again and took the dog for a 3km power walk around the block, then decided that I would try a new class at the gym called ‘HIIT’ which stands for High Intensity Interval Training. HIIT was a lot of fun but it was also very high intensity, which meant that I was knackered and dripping with sweat by the end of the class. I knew right then that I would be sore for a few days.

Friday morning i got up and took the dog for another 3km power walk around the hilly block, then decided that I would skip my lunch run as I was feeling very tired from the HIIT session the day before.

Saturday morning I got up early and trained my client Amanda with a Boxing session, then headed over to a friends place to go for a run with Kristy and her hubby Nigel. We snuck in about 13km of trails through the Royal National Park near home and I felt a little sore in the muscles but generally pretty good. So we had a cheese and ham croissant for brekkie to celebrate.

Sunday I got up early and drove to St Ives to meet up with my Oxfam crew for a 1hr run and then we would meet up with the Trailblazers for an additional 1.5 hour run. This is where I came undone. I didn’t feel too bad for the first hour, but as soon as I started the session with the bigger group I knew it was going to be a struggle, and I ended up turning back early with another 2 runners who had to be back for other reasons (like work). I was getting pain in the arch of my foot & I just felt sore all over. I felt bad for slowing the other 2 runners down as they had to wait for me on several occasions when I walked, but luckily one of them was my good friend (& fellow Oxfam team member) Emma and she helped keep me going.

I got back to the cars, got warm & chatted to the runners as they were coming back then headed home for brunch & a snooze on the couch, I felt exhausted.

Time to rest and recover 🙂

So what’s the new goss I hear you say. What new races have I signed up for to keep me entertained for the rest of 2014……?

Firstly, I went to the physio on Monday after doing the half marathon last weekend and he was very impressed at the lack of pain, inflammation or anything of a negative effect so has given me permission to start being AWESOME again. Which means that I can plan some more big races for the res of the year.

So what did i register for first? The M7 Marathon at the end of July. The M7 Marathon was my first marathon in 2013 and it was now going to be my second marathon. I know quite a lot of people doing the M7 this year too so it will be lovely knowing there smiling faces are out on the course too and hopefully i’ll get to see them at the finish line too.

And what else have I signed up for? Not another 100km I hear you say! But yes, I was asked by my good mate Emma to join her team for the Oxfam Trailwalker in August and i’m very excited about this opportunity. The teams have lots of weekend day and night training runs planned as we plan to run the course (not walk) and aim to complete it within 20 hours. 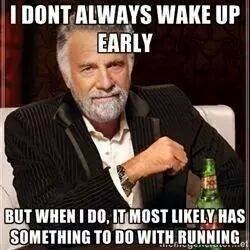